The University of West Florida

Telling the story of a university that lives life without limits.

Nestled between the emerald-green waters and white-sand beaches of Florida's emerald coast, and the the tall long leaf pine forests that once served as the site of the south's most significant lumber trades, lies the 60-year old University of West Florida.

Founded in 1963, the university has grown to serve more than 12,000 students annually (and growing), with a faculty of over 600 professors.

After taking the reigns as the university's sixth president, Dr. Martha D Saunders sought to unify the brand under a single vision: to emerge as a spirited community of learners, launching the next generation of big thinkers who will change the world.

True to form, the students and faculty of UWF are doing just that.

Ranked in the top three universities across Florida (among the top university systems in the country), UWF's story would catapult it to the national stage.

As part of my role as VP of Branding for idgroup, UWF saw not only the (re)emergence of a familiar icon in a newly designed institutional logo, it also saw for the first time ever, a comprehensive, integrated branding and communication campaign focused on elevating the story of this university through multiple storytelling approaches.

"It became very clear to me that Kris is an exceptionally creative and talented individual. Our branding projects were complicated, involving a great deal of communication to diverse audiences. Kris' steady hand kept things moving toward exceptional outcomes. Both projects won national recognition and exceeded the goals of my organizations." Dr. Martha Saunders, President, UWF

"What makes Kris really unique is his account management skills coupled with his creativity and strategic mind. He is first and foremost a big thinker who develops thoughtful solutions and strategies to address needs and overcome challenges."
Megan Gonzalez, VP Communications, UWF

After being removed from the visual identity system for a short period, the familiar nautilus shell—which represented evolution and growth— made its triumphant return to the institution's academic brand identity, updated to honor the history of the university, as well as the represent the sun and water, elements that have the power to create and sustain change.

Members of the university community were invited to nominate individuals (alumni, students, faculty and staff) who they felt were making a significant impact on their community or the world.

Over 300 individuals were nominated in the first rhee days of the campaign launch: Names and stories that would inspire the development of two supplemental campaigns.

The new visual identity was launched to coincide with the publishing of a Commemorative 50th Anniversary Year Book, as well as the 50th Anniverary Homecoming celebration. 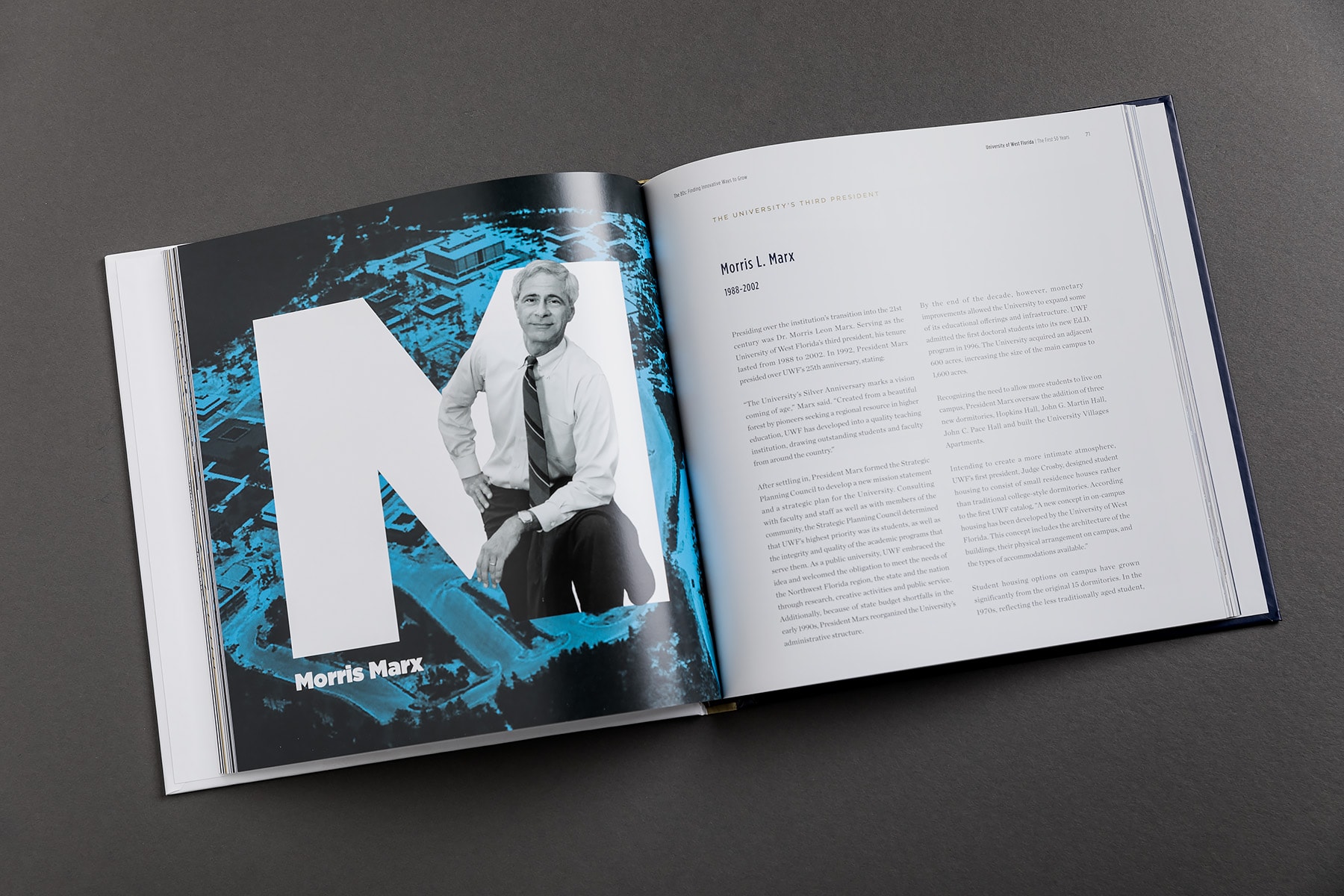 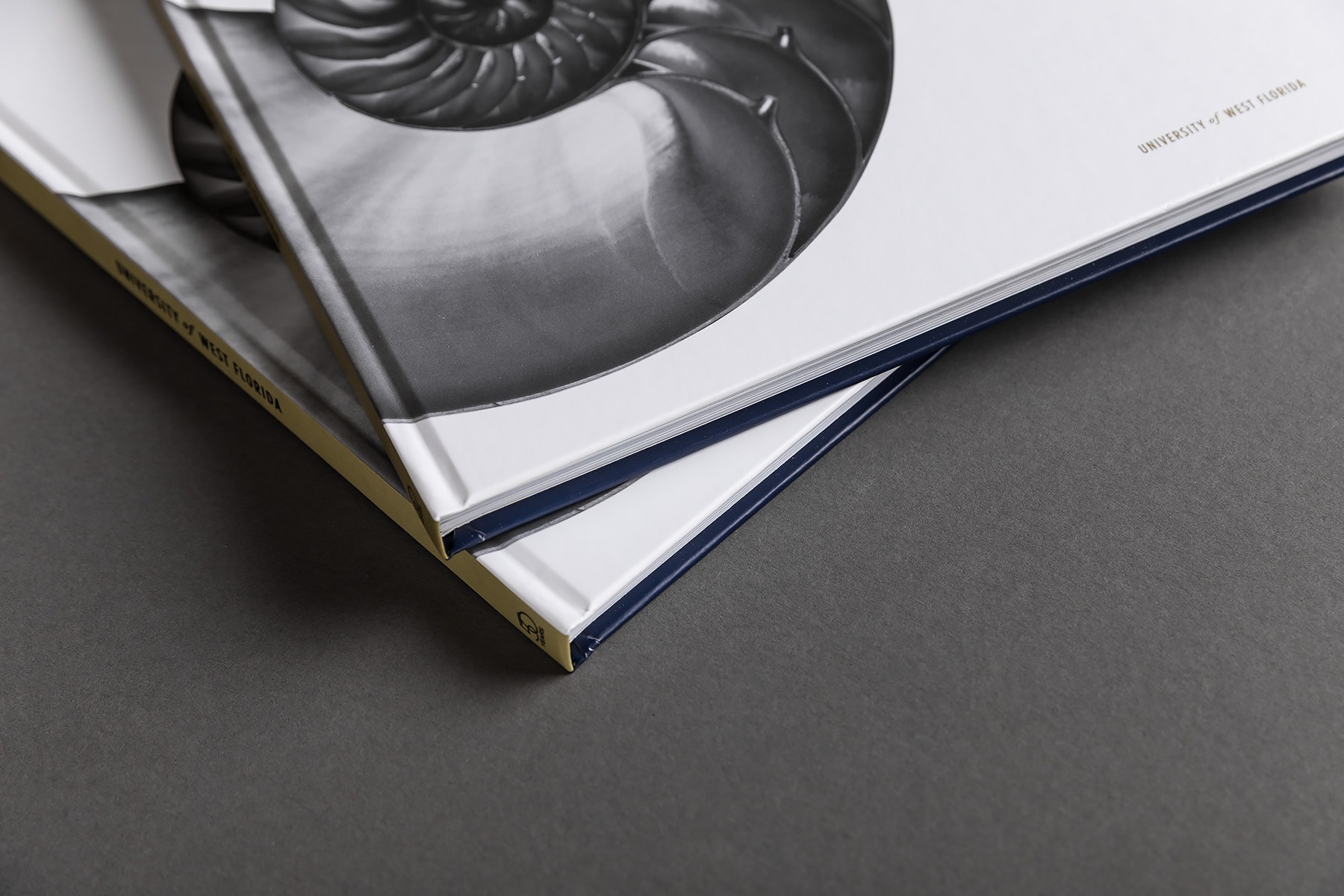 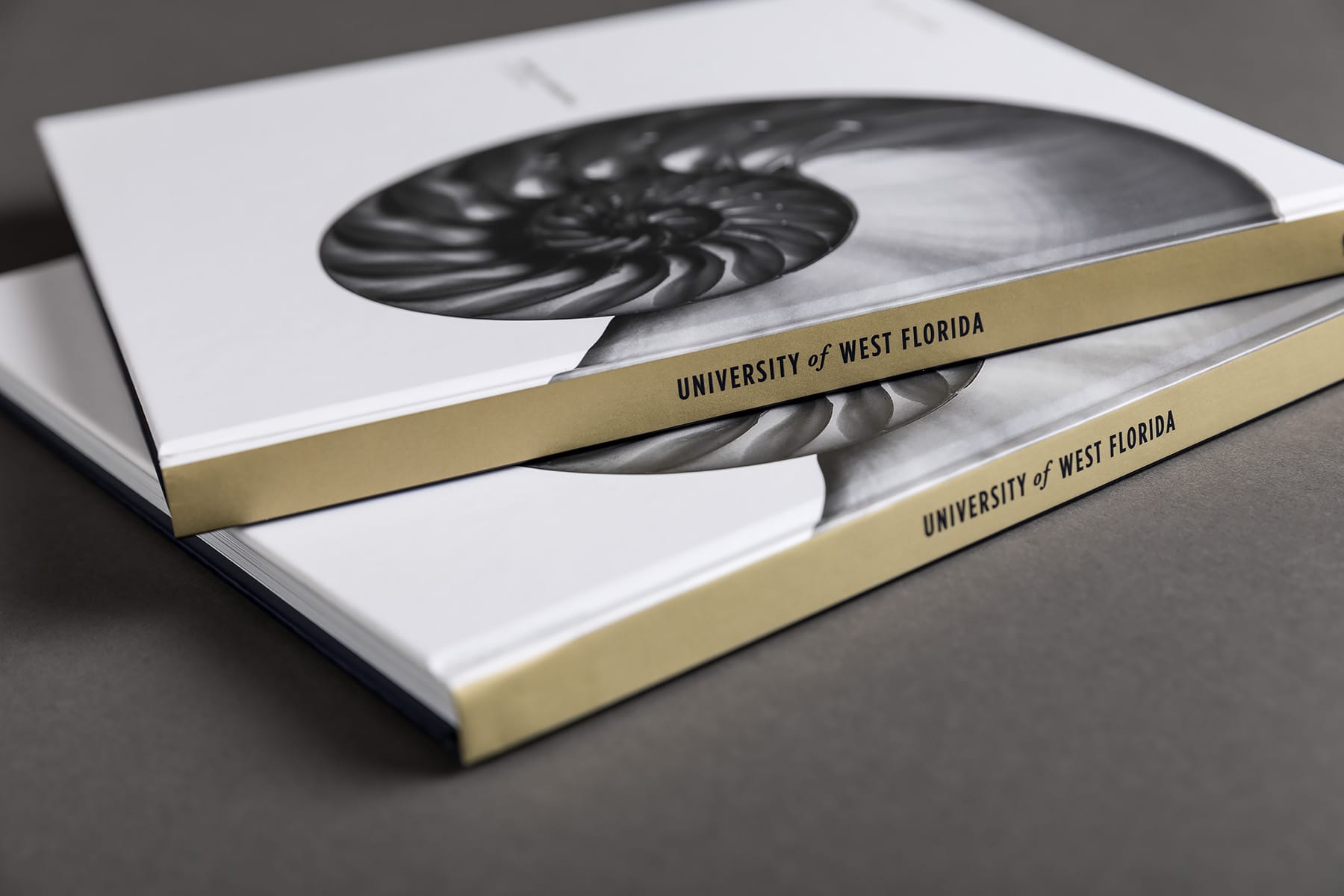 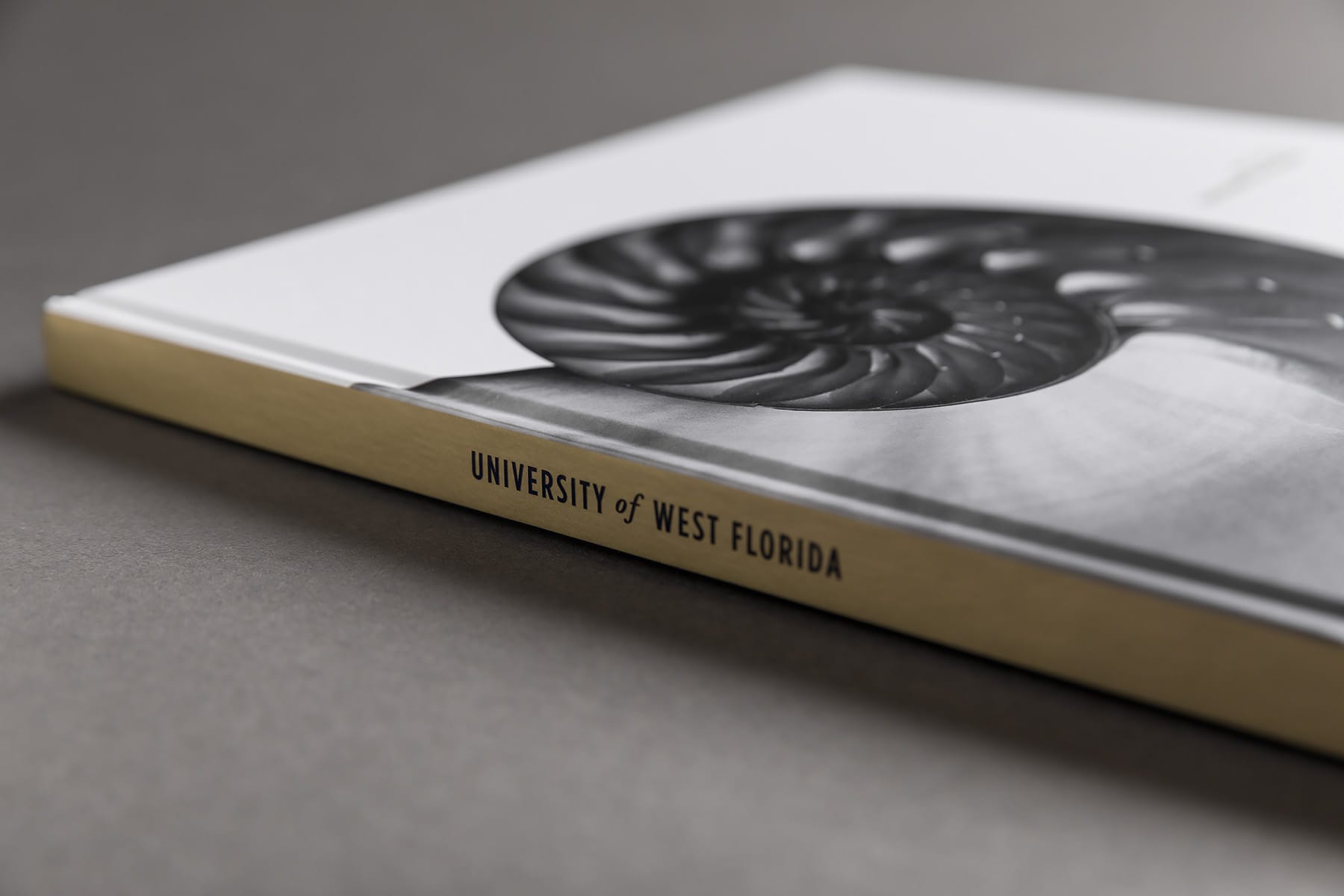 Shortly after the launching of the new visual brand, a national campaign was developed to increase awareness of the university and bring to life the spirited community of learners launching the next generation of big thinkers who are changing the world.

A series of brand awareness spots were created to promote the university's values, as well as features many of the programs of distinction and partnerships on the campus and in the community.

The second spot in the series, Time represented the impact being made on campus by the student experience, as well as the faculty and staff in changing the trajectory of a students' life.

Inspired by the countless names of individuals shared in the rebrand campaign, an interactive website was launched to highlight and celebrate the stories of UWF alumni making a tremendous impact in their fields, the lives of others, and their communities. 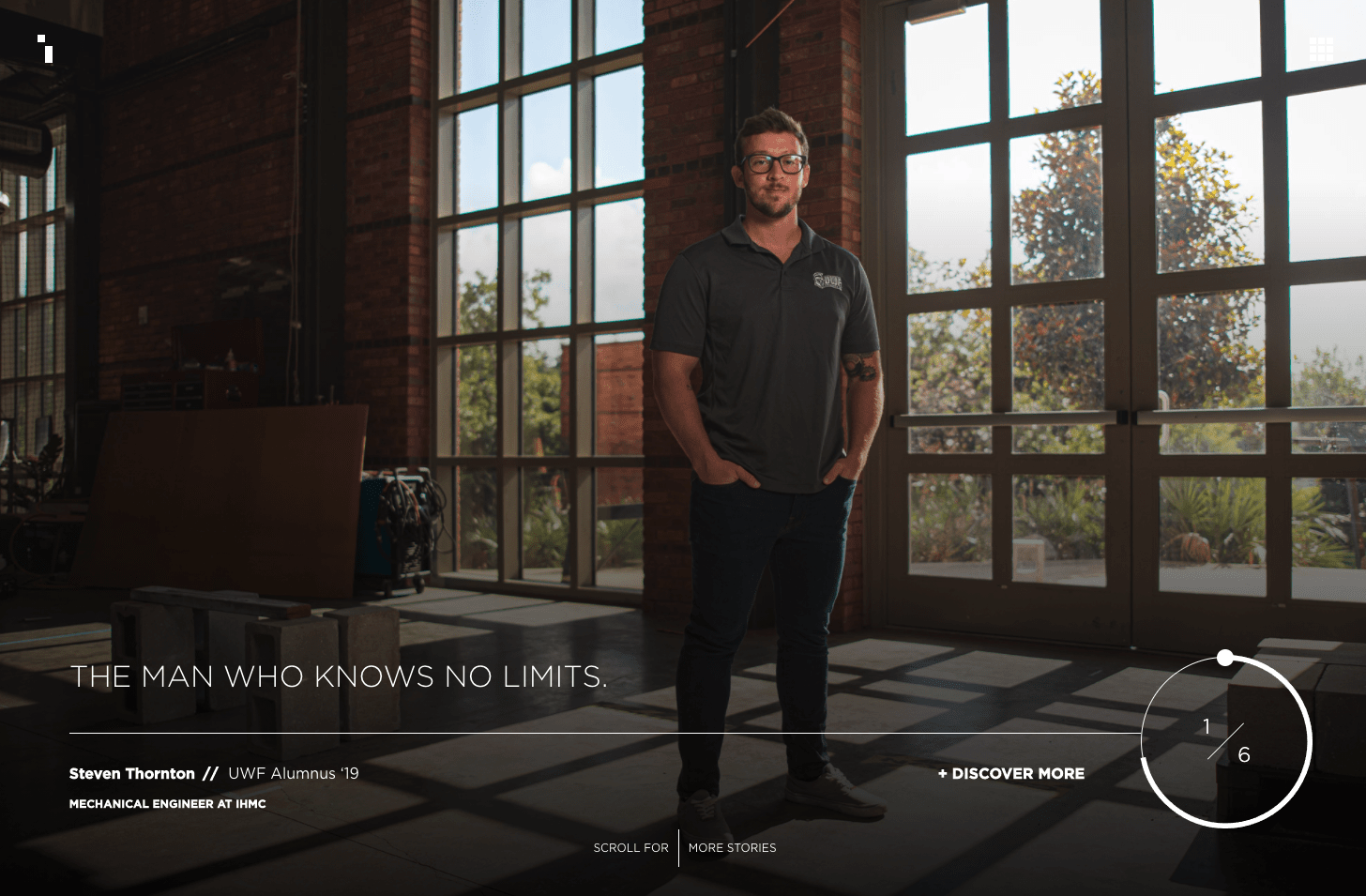 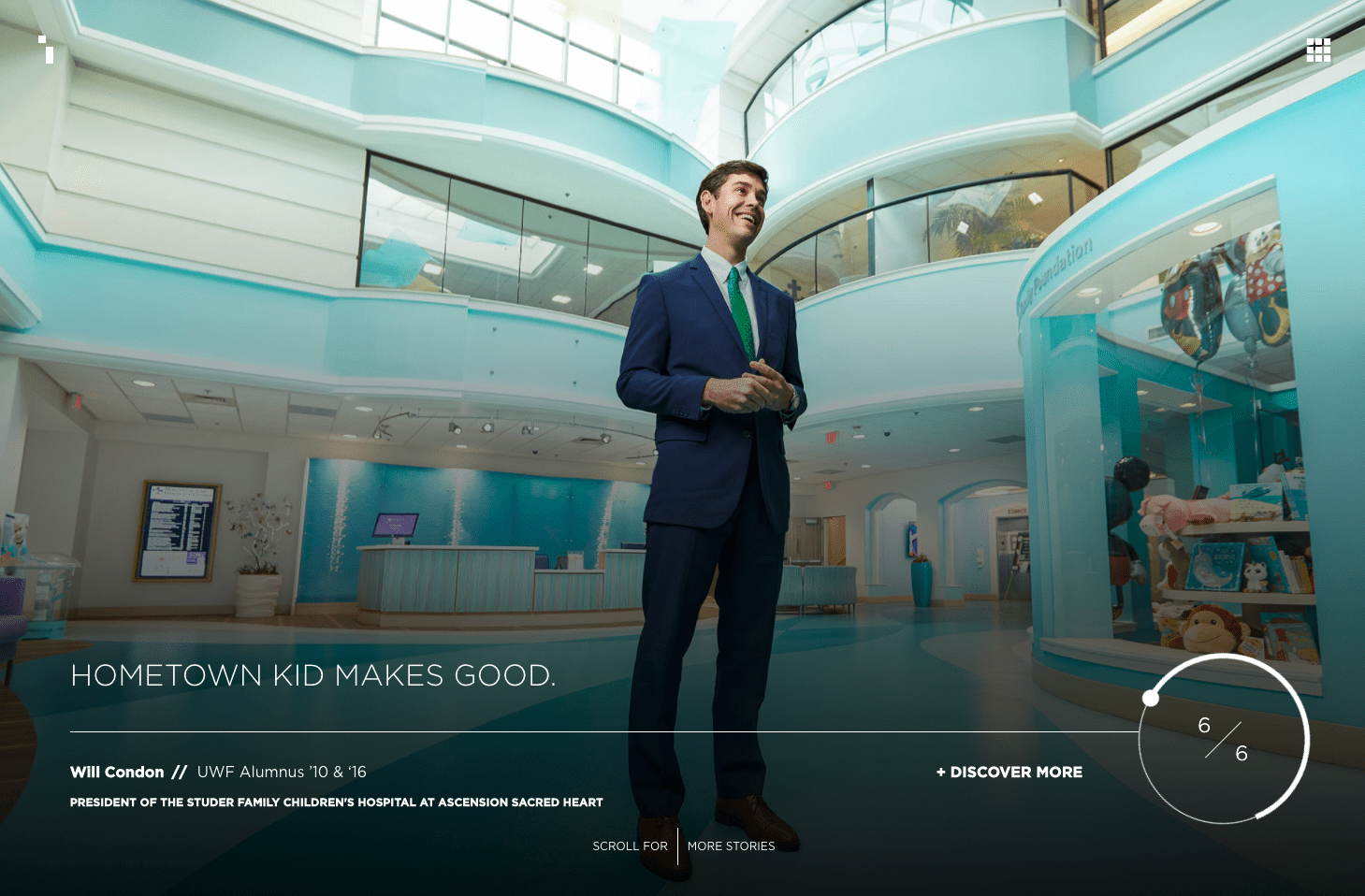 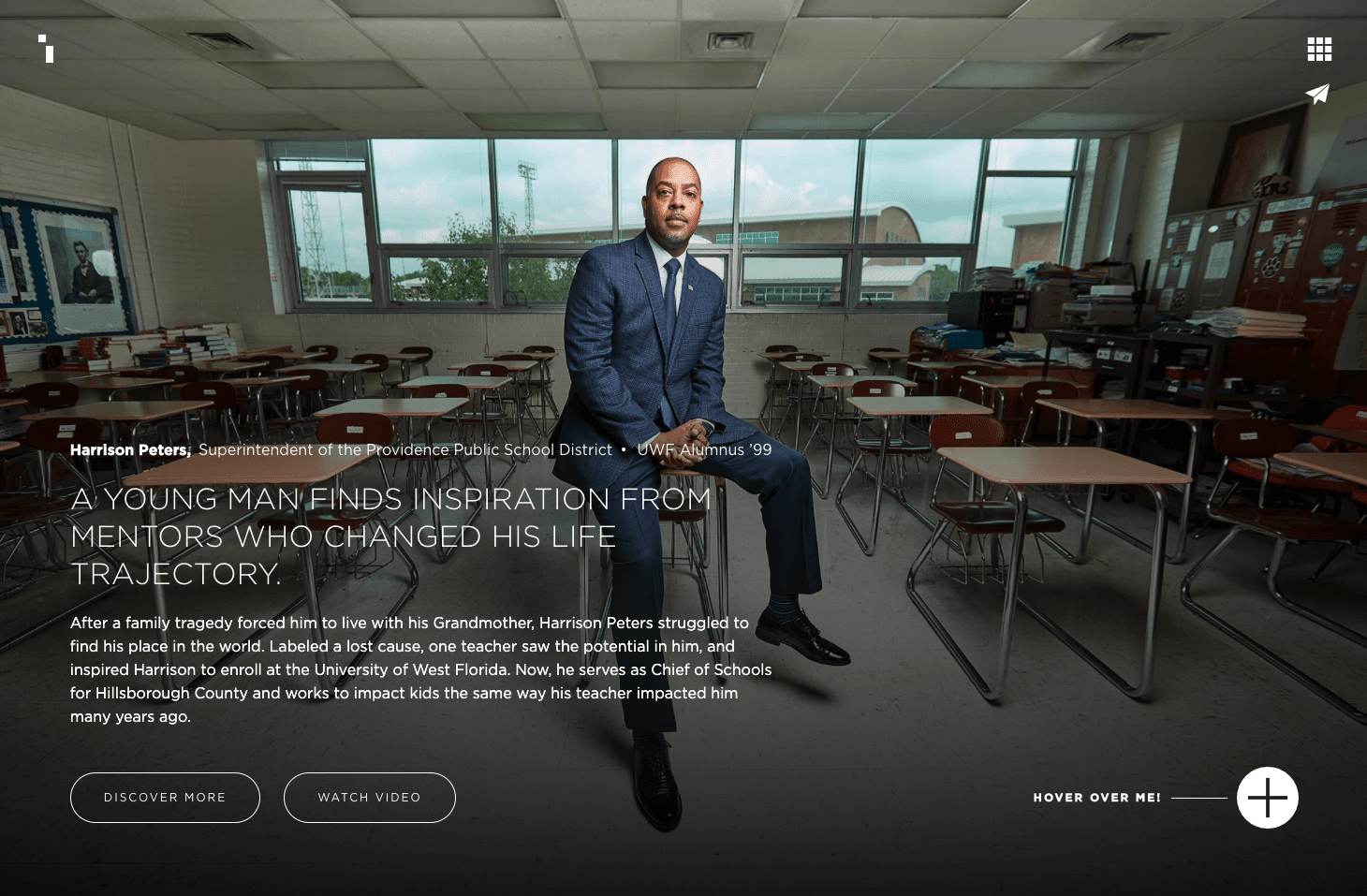 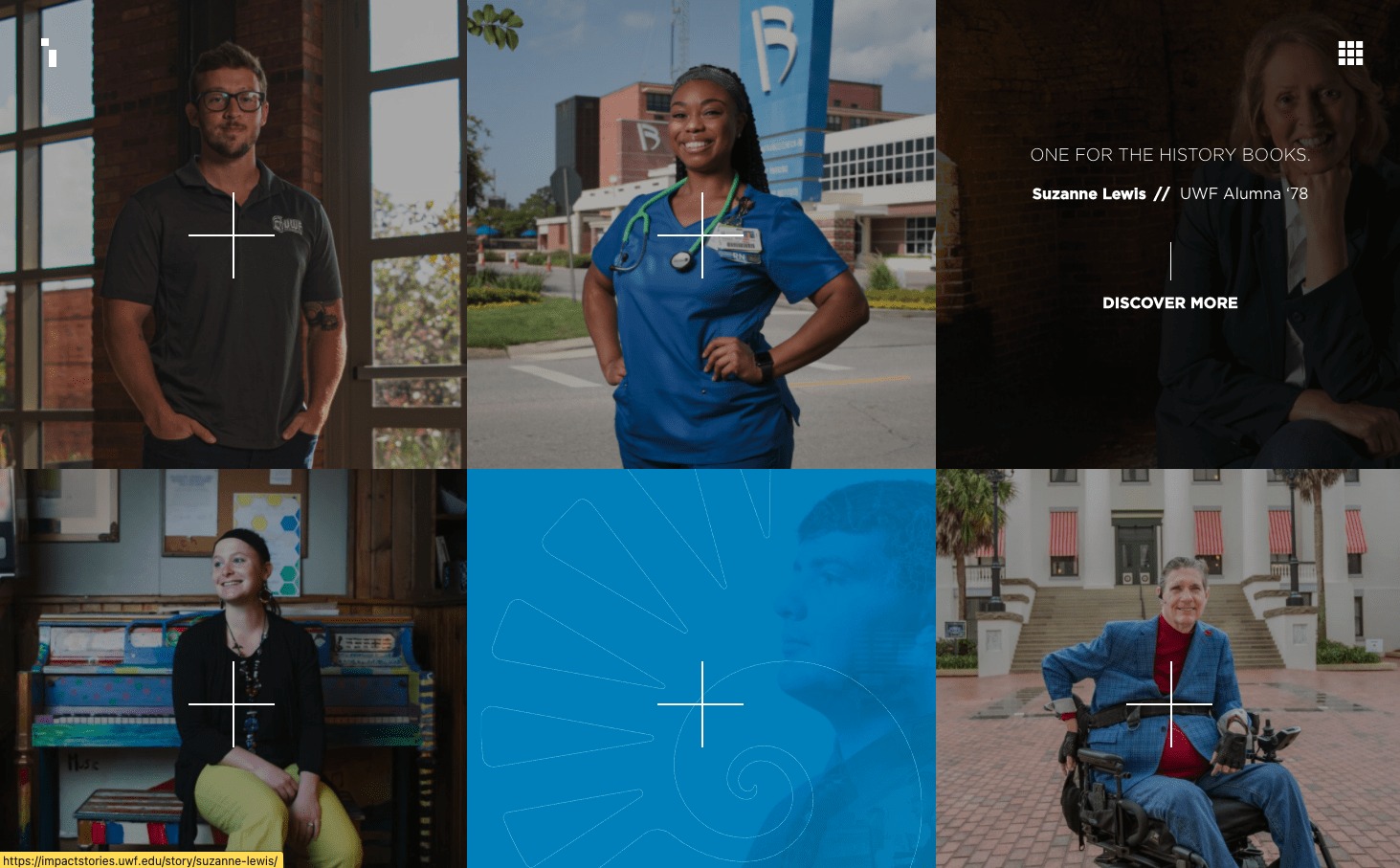 Working closely with Alumni Services and the Office of Institutional Communications, we developed a highly interactive and immersive editorial-style, multi-media website to share and collect stories of impact. Stories were produced in a variety of digital media, including docu-style video vignettes, journalistic photo essays, and interviews. Where the university had not previously had a centralized location to share the stories of their alumni, this space would now serve as an ever-evolving repository of the university's impact on its graduates, and in turn, their impact on their communities.

In addition to highlighting the successful stories of alumni, the logo refresh campaign illuminated several programs of distinction. A supplemental campaign was developed in an effort to highlight not only the students graduating in these programs, but also to elevate the programs themselves, and specifically, their impact on the regional or national stage. 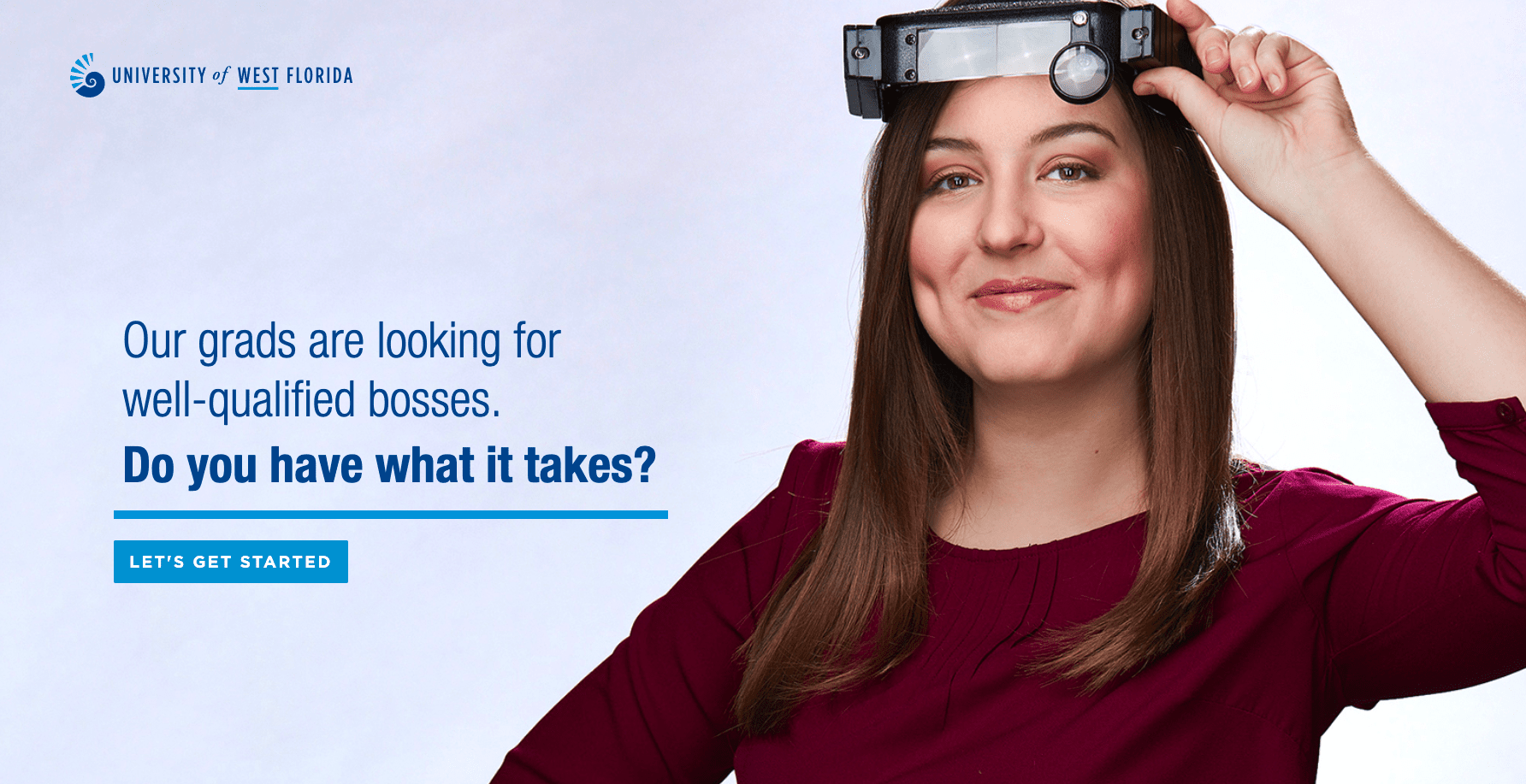 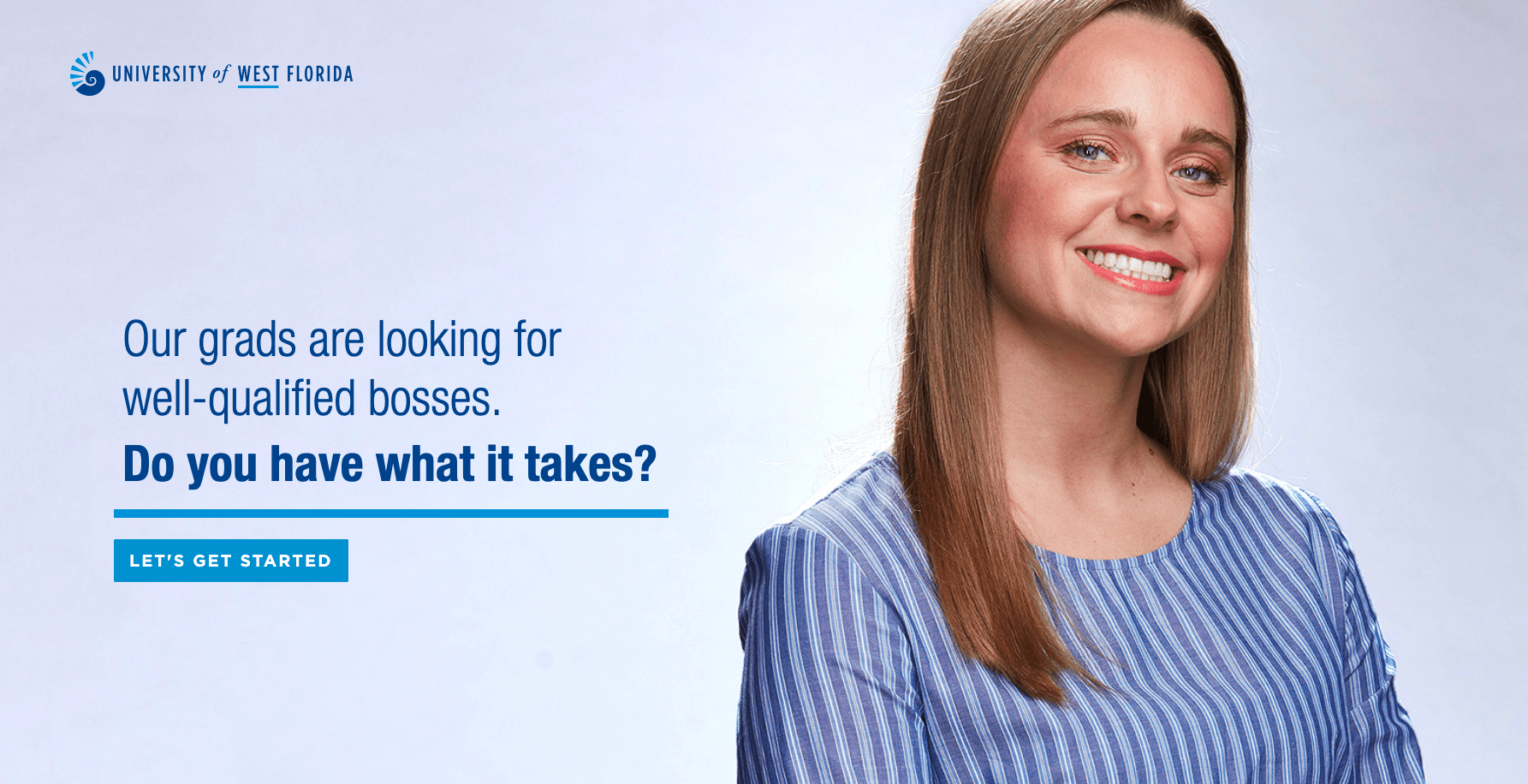 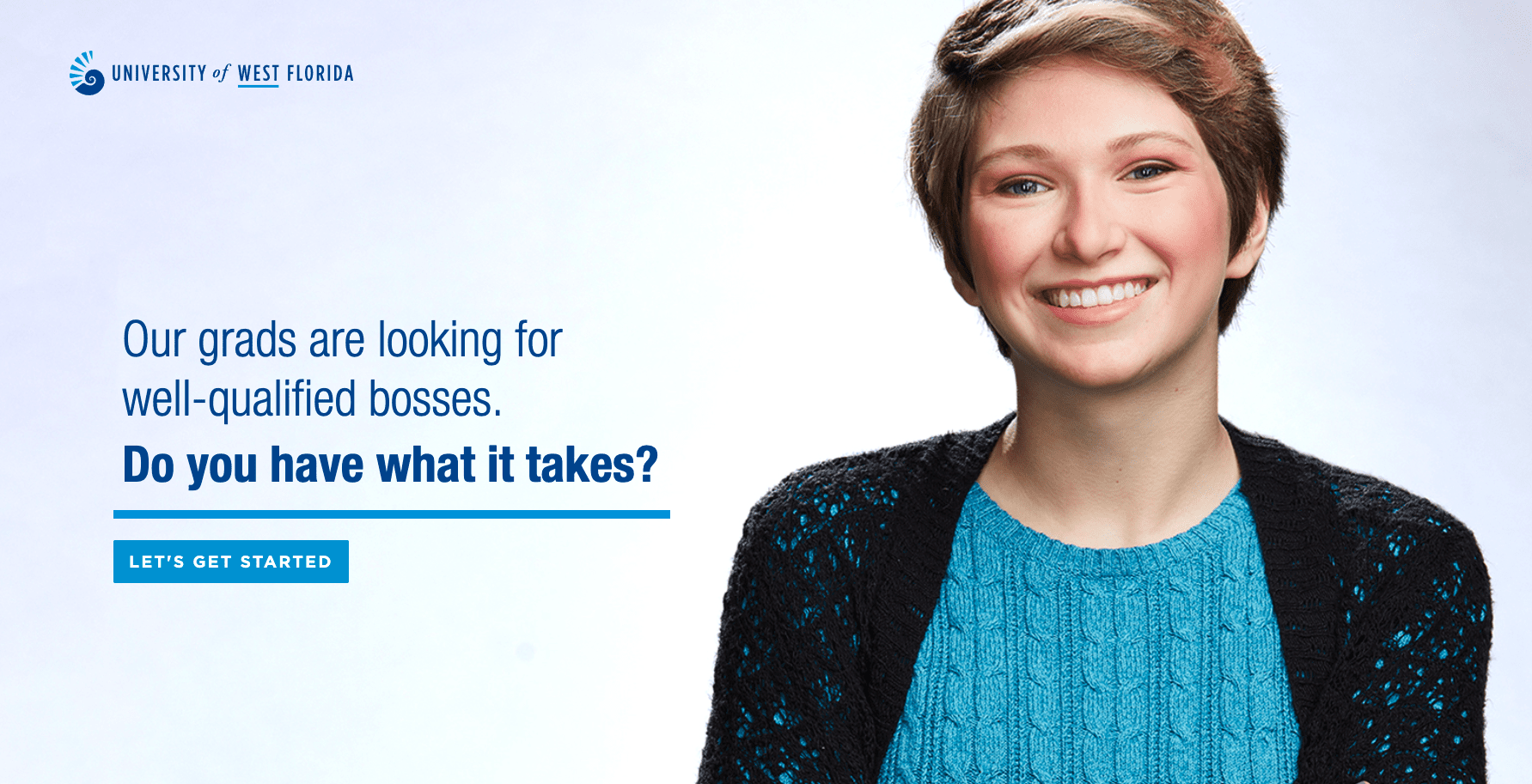 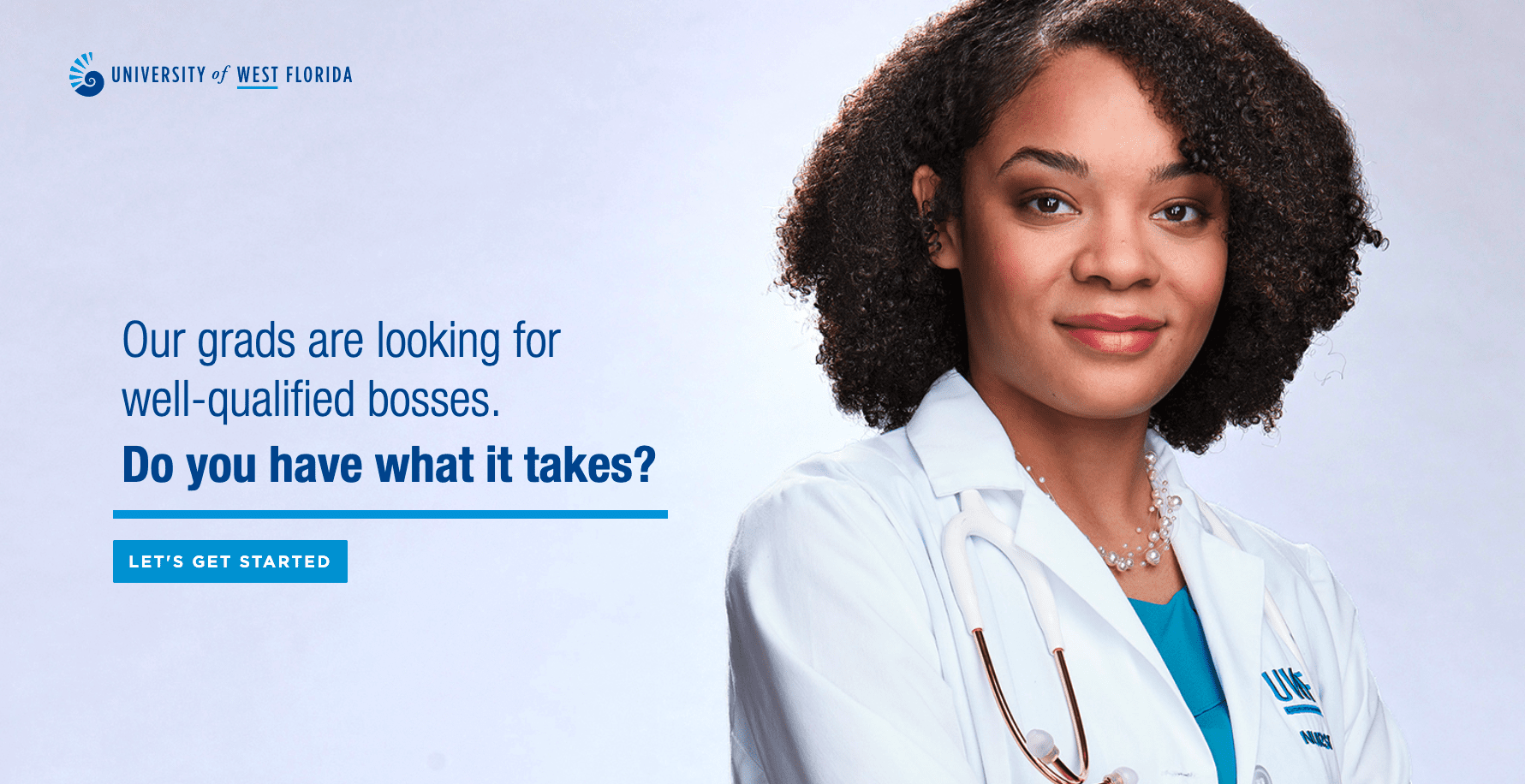 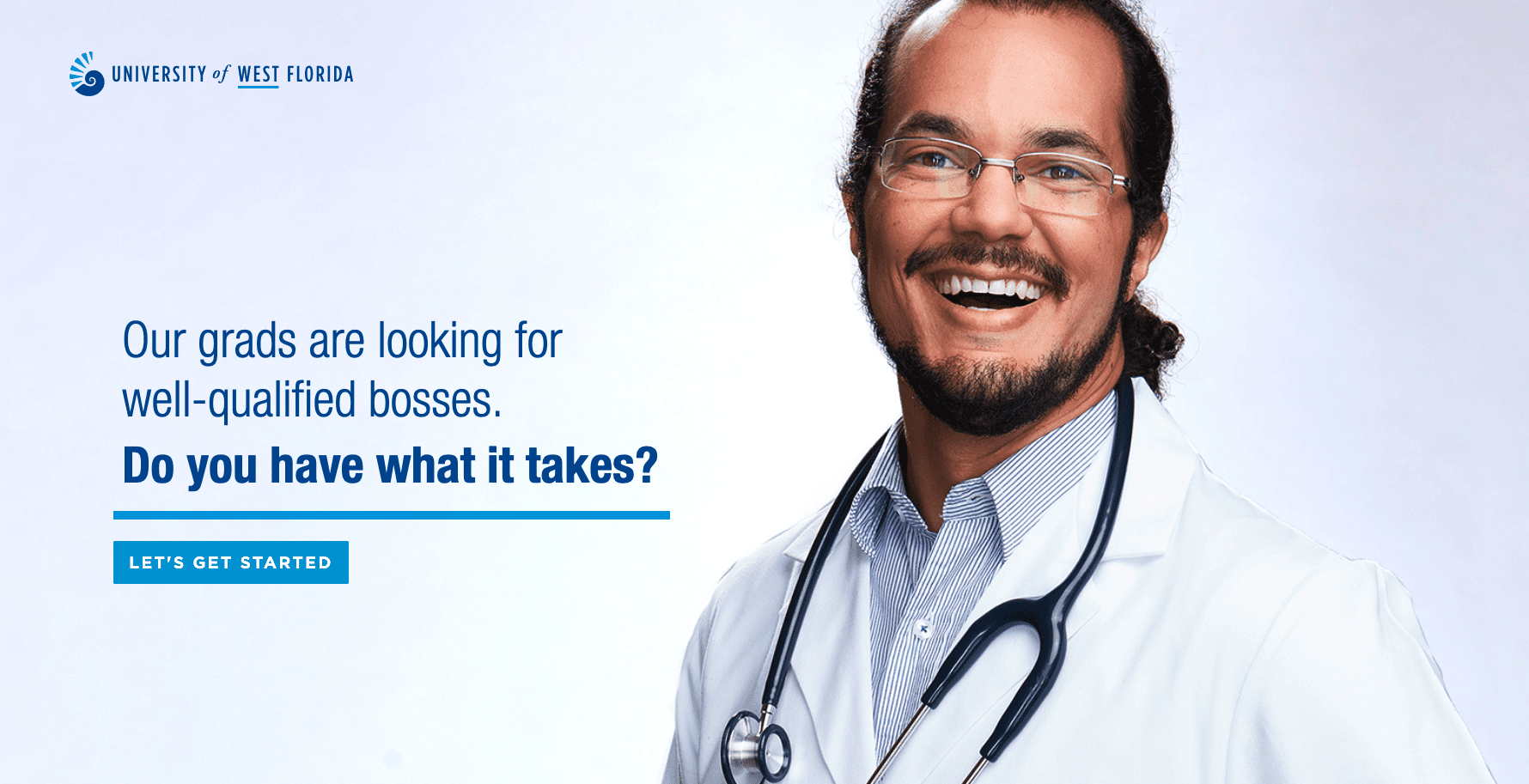 I worked closely with the University's Career Services center to identify real students in the top educational programs. The campaign featured a series of print and digital advertising that positioned the students as highly qualified right out of college with a twist: Our candidates are looking for well-qualified bosses.

The campaign directed users to a landing page specifically tailored for getting employers to sign up for the University's career services portal, which also featured video vignettes of various student-employer matching success stories. The University saw a 230% increase in sign-ups during the campaign period.